So, almost after all hope was lost on Day 153 the first Gila monster egg pipped from its leathery shell! Egg 02 at first cut a small slit and then a few more and over the next two days began to emerge from the egg. At first the baby Gila stuck its nose out, then it’s head, then half its body, and finally the entire body. It appears that hatching is a labor-intensive process as there are long pauses between progressive stages and also seems to be a good way of ensuring all the contents of the egg are consumed before leaving the egg. Over the ensuing days this process was (and currently is for two more lizards) repeated over and over, with Gilas emerging from their shell about two or so full days from pip to full emergence. Once the contents are completely devoured the neonate Gila monster leaves its shell and begins to wander the egg box. I witnessed one Gila that was out actually eating the egg yolk of another just coming out of its shell! Greedy bastard. 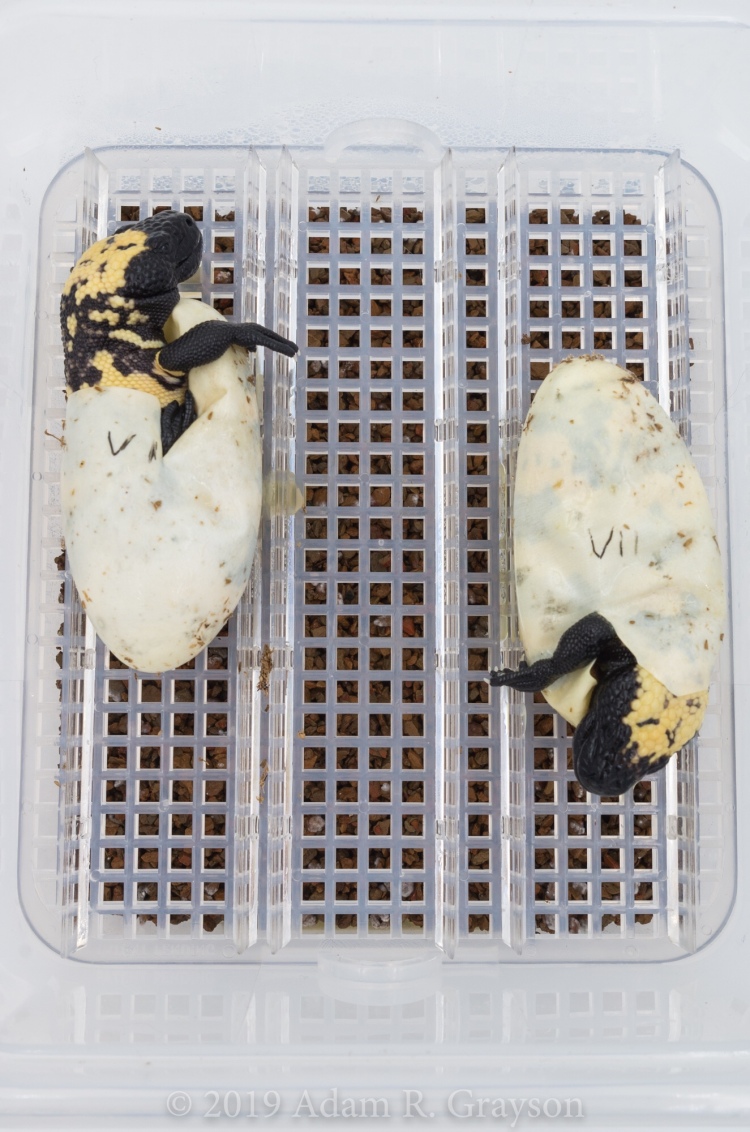 Once fully emerged and climbing around, the little monsters are pulled from the egg box, photographed, weighed, and set up solo in an 18 quart Sterelite box with paper towels as bedding and small water dish. The paper towel bedding serves as a clean substrate while the umbilical wound heals and the first few meals are eaten and passed through to make sure everything is going well. I will attempt the first feeding next week after the yolk has been fully digested and look forward to raising the babies from there!

I will be posting updates on the neonates growth, as well as some thoughts and insights on my first season captive breeding Gila monsters. Some reviews of the equipment I used is also likely in order as these items played an important role in my success. Whew, what an amazing season! The process has been fun, though frustrating and worrisome at times, and I look forward to greater success next year with these amazing reptiles!